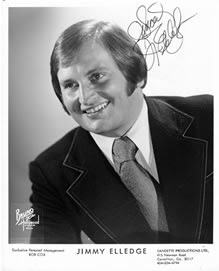 Jan. 8, 1943-June 10, 2012.    Jimmy Elledge was born in Nashville, TN, living there until his mother passed away when he was 9 years old.  He was sent to live with his aunt and grandmother in Philadelphia, MS., and three he grew up. Jimmy went to high school in nearby Meridian, MS. attending Meridian High School. Jimmy Elledge crashed the charts in the early ‘60s with his Chet Atkins-produced rendition of Willie Nelson’s “Funny How Time Slips Away.” Jimmy started out singing and playing piano in the Future Farmers of America Hillbilly Band during his early teens. While most of the group’s repertoire consisted of the country songs of the day, Elledge handled the rock ‘n’ roll segment of the set, often performing his specialty, Jerry Lee Lewis numbers.  When he was 18 years old, Jimmy Elledge sent a demo tape to famed country producer Chet Atkins, who signed him to RCA - Victor Records. Elledge’s debut single, the country ballad ‘Funny How Time Slips Away’ - produced by Atkins and written by soon-to-be country superstar Willie Nelson - reached the US Top 30 in early 1962 and earned him a gold disc for selling over a million copies.  Jimmy signed with the Hickory label in the mid-60s.  He would later immortalize his rockin’ piano style on one of his first discs, “Swanee River Rocket.” Besides his Atkins-produced RCA sides, Elledge made the Nashville Record Row rounds throughout the ‘60s, waxing sides for Spur, Hickory and, most impressively, Aubrey Mayhew’s Little Darlin’ label, where he recorded alongside a young Johnny Paycheck. Little Darlin’ released an LP on Jimmy, complete with a cover portrait of him standing in front of the Fontainebleau Motor Hotel, located catty corner from the Rock ‘n’ Bowl! Long a Bourbon Street favorite, Elledge swapped sets with the Meters at their first-ever gig at the Ivanhoe around the same time.

Although he’s always prided himself for his ability to sing and play in virtually any style—and his earth-shattering falsetto can lend feeling to any song that he lays his hands on—country soul is his unintended specialty. His renditions of Roger’s Miller’s “A Golden Tear” and Margaret Lewis’s “Reconsider Me” are the stuff of legend, taking on lives of their own when Jimmy belts them out. Elledge also happens to be the torch bearer of the great Floyd Cramer “Last Date” style of piano playing. All this and more have been earning him accolades in the South—and in particular, the New Orleans area—for over four decades.  In 1961 Jimmy signed with RCA Records producer Chet Atkins and in 1962 released "Funny How Times Slips Away," which up to now has sold six (6) million copies. 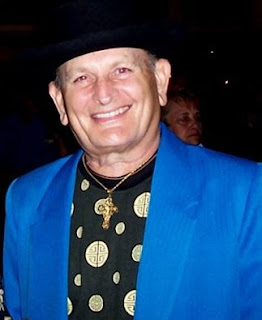 In 1962, Jimmy was introduced to Bourbon St in New Orleans while playing the famed "Dream Room" during the middle 60s. He also wrote songs which were recorded by the "0smonds" and good friend "Ronnie Dove." During the 70's, Jimmy played many clubs on the Westbank such as: the "Ces Si Bon," the "Travel Lodge," the "Fox & Hound," the "Golden Pagoda," and "Cabe's Corral." At that time, Jimmy also entertained in his own nightclub, the "Jimmy Elledge Club" in Gretna and released a country hit with "One by One." From the late 70's thru the 80's and 90's, Jimmy has entertained in many spots nationally and internationally, as a piano-bar entertainer, as well with trios and quartets. Locally he has played the "Fairmont & Monteleone" hotels in New Orleans, "Holiday Inn" in Kenner, "Goodfiellas" and "Salvatores' Restaurant & Lounge," both in Metairie. Most recently (2004), Jimmy just completed a fourteen (14) month engagement at the "Red Maple" Restaurant in Gretna. And has just come back from a tour with Johnny Tillitson and Billy Joe Royal. Presently, Jimmy is in the studio recording a new CD, which will feature duets with his good friend, Billy Joe Royal. 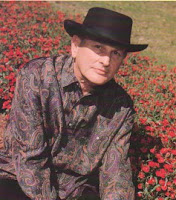 Jimmy's five octave range has properly classified him as an "all 'round" entertainer, which has allowed him to perform with some well known names as: Willie Nelson, Chet Atkins, Floyd Cramer, Brenda Lee, The Osmonds, Jackie Wilson, The Temptations, Sam Cooke, and Jimmy Dean, just to name a few. Jimmy presently lives on the Westbank in Belle Chasse and has for many years. He is actively involved in the "Helping Hands Association" and the "Annual Swamp Pop Seafood Festival" both in Plaquemine Parish. This year, 2004, is Jimmy's 45th year of singing and playing piano. He gratefully acknowledges God for all his blessings, his parents, Chet Atkins for giving him his first break, to Pat McCabe who is still there for him, and to all the fans for all these years.  His first recording for Chet's RCA label was "Funny How Time Slips Away", which was written by Willie Nelson and produced by Atkins. The song became a hit, peaking at #22 on the Billboard Hot 100 in 1961. Elledge recorded for Hickory Records later in the 1960s but never had another big hit.
Jimmy did not record at RAP records but is listed here as an acomplished Mississippi  music artists.  Jimmy frequented New Orleans and performed in the Crescent City often. Elleedge toured  with Rick's Continentals Band during 1965-1966 and they provided  the backup music for the Nashville country artist. He was very popular in the clubs in and around Meridian with his hit, "Funny How Time Slips Away," and "Sad Town."

Jimmy Elledge Discography
Jimmy was an important Nashville music artists who contributed much to music in Mississippi late '50 and '60 and his recording discography is expansive. His style is country- rock and could sing and play piano better than almost anyone I've ever heard. It was a pleasure playing and working with Jimmy in 1967 & 1966.
By Praguefrank, Bernard Seibel, Michel Ruppli, Kurt Rokitta