The Bands That Rocked The South﻿﻿

Welcome to the  Official RAP Records  section on Mississippi Music Artists.com. The information contained on this section of Mississippi Music Artists.com  about RAP Records recording and music publishing (Meridian, MS) is based on my memories as a member of Rick's Continentals Band and from the perspective of my personal experiences as a musician who recorded at RAP Records studio in 1965, 1966 and 1967.  I will add first person comments on this site occasionally to add detail to the story about RAP Records '60s Music Recording and Publishing Company. Bob Reetz' brother, Steve Reetz, has contributed content to this website through an interview and in recent months I was fortunate enough to  acquire the complete surviving  RAP Records master recordings and other materials from Bob Reetz's personal collection of sound reels, cassettes and vinyl records.  This collection has yielded a wealth of new information about this rare '60s record label from Meridian, MS. and the music artists who recorded there.


Included in the collection are more than 100 original reel to reel sound master recordings. This acquisition has produced much new (old) recorded music material that was thought to have long ago disappeared, forever.  This treasure trove of master sound reels includes music recordings by Paul Davis, George Soule, Rick's Continentals, The Six Soul Survivors, The Livin End,  Sea Fever, The St. Louis Union,  The Scrags, Marty Collins, Earl Aycock,  Eddie Houston, Bill Hocutt, Melvin "Butterbean" Thea , Jody Leavins, David Posey, Bobbye Jean Reetz, Ray Morgan, The Motivations and The Swingers. Songs with unique titles like, "Chicken Thief,"  "Red Snapper" and Alligator Man." These listed artists are but a few of the musicians who recorded at RAP Records under one of Bob Reetz's recording labels.  The most famous artists to identified so far are The Allman Brothers Band and Meridian's own, Paul Davis.  Most of the recorded work was distributed on a local or limited regional level. However, some of the recordings like Rick's Continentals' "You Can Live it Up" saw an expanded regional and national distribution through the marketing strategy  of Rip Coard, the band's manager, and through Rick Spence's father who owned a chain of radio stations in New York servicing the Northeast US. Most of the artists would eventually move on to other careers, get married as their music interest faded away. However, there was one in particular who moved on to an acclaimed career in music. Paul Davis become a celebrated music artists and songwriter with his hits like "I Go Crazy,"  " '65 Love Affair" and  "Cool Night".  I will always remember recording with Paul at RAP Records in 1966 & 1967.  This is where he started his recording career along with other musicians in Meridian, MS., producing his first two records "Gotta Find A Way" and "It's Over My Head."  Over the years since those days as a rock & roll musician in Meridian, MS.,  I would revisit the music scene and RAP records in my thoughts, occasionally searching the Internet to see if anything had ever been written or posted about Meridian's one and only music recording studio. Nothing appeared except the work related to websites that had been launched for Rick's Continentals Band. Then during the past three years, I occasionally found a reference to a RAP Record.  A picture post of a RAP Record, usually Red Snapper or Chicken Thief, a '45 for sale on EBay and occasionally someone asking if anyone knew anything about the RAP Records recording company in Meridian, MS.  I decided to launch this website dedicated to Bob Reetz, the RAP Records Label and the music artists who recorded their music and songs on this label in the '60s.  I hope you enjoy this site dedicated to Bob Reetz, RAP Records and the '60's music artists from Meridian, MS. ........Ray Vaughn, Rick's Continentals Band and Webmaster for RAP Records on the Web
﻿﻿


Bob Reetz .....RAP Records was  Meridian's own music recording company founded by Bob Reetz in 1965 in Meridian, MS.   Bob Reetz's "RAP Records,"  also known as "Recording Artists Productions"  and "Reetz Music Publishing Company,"  was the original record label for Bob's music publishing company.   In addition to the RAP Records label,  Bob Reetz's music  publishing labels would later include MISTOWN, CANDYTREE, CHUBOB,  CHAR-MART and Mister DJ Records. All of these labels were recorded, produced and distributed through Reetz's Music Publishing Company.  Most of the recordings were distributed on a local or limited regional level.  However, some of the music recordings produced at RAP Records saw multi-regional and national exposure and distribution. Examples include "You Can Live It Up" by Rick's Continentals and Paul Davis' work which led to his career in music as a songwriter and recording artist with many acclaimed top 40 recordings and a national  recognition of  his musical talent.

In 1965 the original location for RAP Records Studio was Bob's Record Shop, a building next door to Peavey Melody Music in the 800 block of 22nd Ave., downtown Meridian, MS. The studio was in a back room off the main business part of the store. Hartley Peavey had started his Peavey Electronics business next door, upstairs to Peavey Melody Music. In 1966, RAP Records moved to North Hills Shopping Center on the North End next to Pollman's Bakery and it remained there until late 1967. From there RAP Records moved to a building located at 415 B. Street, Meridian, MS. where it remained until 1975. About that time Bob Reetz closed RAP Recording Studio and sold the building to his brother, Steve Reetz.  It eventually became the Meridian Harley Davidson dealership and remained that until Steve sold the business in 2003. Steve Reetz now has an office located at this address and the recording studio space is used for storage. RAP Records studio in 1966-1967 included one large acoustically insulated-sound proofed recording room with microphones and a control booth with a large viewing window through which the sound engineer could view the artists during the the recording sessions. 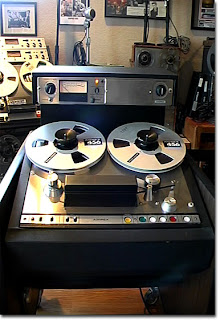 The main recording console was a big Ampex 351 reel to reel tube machine with 3.75, 7.5 and 15 IPS capability accompanied by a large multi channel sound mixing board and two huge speaker boxes with 18 inch speakers.  The Ampex recorder is still in the collection as well as the massive speakers which Bob Reetz build himself. There was no sound on sound in the early days and everything was recorded using house microphones that were strategically placed for the music instruments, vocals and drums. The songs and music were recorded until a clean sound track with optimum sound levels and hopefully few recognizable mistakes was obtained. This sometimes required hours and hours of recording over and over again to capture the most perfect recording. Finished tracks were spaced with leader splices and wound onto a master sound reel and send to be pressed onto vinyl 45's or 33's (albums) for release if the artists chose to release their work.  Most of the recordings that were released and published by RAP Records were sent to VILLE PLATTE Record MFG. CO. in Ville Plate, Louisiana. There the masters were pressed into vinyl recordings and then returned to RAP Records in Meridian, MS. From there the records were distributed by the artists, their managers and promoters. A minimum order for 45's was 1 Box of 100 records. Some of the sound master tapes were taken by the artists for promotional marketing or auditioning at another sound studio. Several of the RAP recordings were picked up by other labels with the artist recording and distributing on those label.  An example is Marty Collins.  Some of the RAP recordings were also recorded and distributed on the Denham Springs, LA. Wagon Wheel label. Marty Collins and Bobbye Jean Reetz also recorded and distributed songs on Nashville's Plantation Records label.

Many would say that the quality of sound recordings at RAP Records was not as good as that of the finer studios in the South and that is true. There is no comparison to the work recorded at Malaco or Muscle Shoals studios. The master recordings at RAP Records varied from artist to artist, t but I believe that the music recorded at the RAP studio was important for two reasons. It gave the area music artists a local studio to lay down their sound tracks producing work for distribution or auditions at better studios and it allowed local artists to record the songs and music that were in their hearts and heads with the hopes of producing that special tune that would capture the attention of a major producer or record label and move their rock & roll dream to reality. The RAP recordings were not the quality of Malaco or Muscle Shoals, there is no question. The quality of the equipment, especially the microphones, was not up to par for a premier recording studio.  But hopeful artists like Paul Davis started in this setting and recorded enough work at RAP Records to open doors at other studio locations and the rest is now history. When the RAP Records master recordings were remastered in New Jersey for Rick's Continentals in 2009 the results were excellent. The studio sound producer stated that because no Dolby had been used in the original recordings the music was pure sound and could be remastered to produce a high quality recording using modern sound editing software. Today most of the recordings are in great shape with good clean sound throughout the recording.  But these master recordings are what they are.  Forty plus year old recordings. ﻿ Many would say that the quality of the recordings at RAP were not great and that is true. There is no comparison to a finer studio with high quality recording equipment and microphones. The quality of the